For We Wrestle Not against Flesh and Blood

"For we wrestle not against flesh and blood, but against principalities, against powers, against the rulers of the darkness of this world, against spiritual wickedness in high places".
Ephesians 6:12
This Scripture came alive for me as I attended the Occupy Wall Street protest in New York City on Saturday, September 17. It was my first protest ever, but I can easily say I will never be the same. I went with a group of 9 other Christians as the Protest Chaplains. We were there to be a specifically Christian witness against corporate greed and excess and the exploitation of the poor. It was absolutely wonderful to stand in solidarity with the protesters! We sang, we prayed, we gave out about 500 granola bars and we had many conversations with many wonderful people. 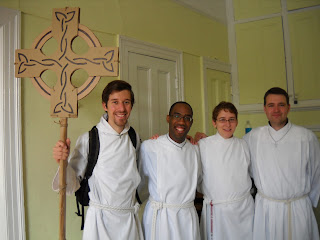 One of the things I remember most is seeing the bronze statue of the bull for the first time. It was barricaded and there were police standing around it to protect it from protesters. I was disgusted! Seeing police officers defend this idol, this symbol of the false god of money devouring human lives in order to make a profit, made me want to vomit. It was then that I became aware that we were confronting evil. This protest wasn't just a social battle it was a spiritual one. We joined the people and we marched around the bull several times holding up a cross and I felt God marching with us. My eyes are tearing up just thinking about it. The atmosphere was intensely charged. I felt this surge of energy and the conviction that darkness cannot overcome the light. Evil will never conquer good. Justice can be delayed but it cannot be stopped. This bull and all who swear by it will fall.

This was the first time that I realized that being a follower of Jesus in this present time meant being an activist. When huge banks and corporations seek to devour the soul of America, highjack our political and economic systems and reduce democracy to a historical artifact, Christians must not lock themselves in their churches. We must follow Jesus out of our churches and into the streets to stand in solidarity with all who fight for justice, fairness and equality. Our faith never tells us to run and hide from evil, but to confront it head on with the knowledge that evil shall not prevail.

It is not enough for the church to say "Blessed are the poor". What are we doing to help them? Do we dare speak the truth to power in love? Are we willing to lay aside our comfort and complacency to be a voice for those who are trying to be silenced by systems of oppression and exploitation? Let's not just say what Jesus said. Let's do what Jesus did and is still doing today: setting the captives free. Let us turn our prayers into action. Let us follow Jesus, the Liberator; the Jesus who was never ok with anyone being mistreated and stepped on, especially the poor. This protest gives me an opportunity to do just that and I am going to follow this Jesus with all that I have within me. I hope you will join me.